I put on a fearless knitter button 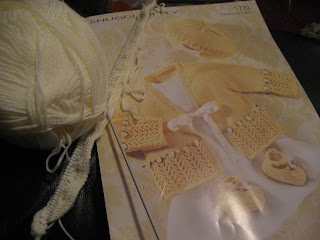 Because I'm going to cut a steek and put a zipper into a sweater that I love more than life itself. I figure I've earned it.

And, get this... my X husband has been in town all week. That in itself has turned me into a more pious woman because I've been on my knees, thanking God, that we're divorced. Phew.

Tomorrow I'm going to Dida's to install hardwood in her kitchen, entryway, hallway and bathroom. I got the wood for free from work, so we have a limited amount to play with, but those areas HAD to be replaced so that Dida and SIL can sell their condo (they're building a new house in Airdrie). Dida came over this afternoon and said that John (the X) is currently wearing SIL's underwear and t-shirt (2 sizes too small) that he took out of the dryer (without asking); and that she caught him with a box cutter just about to cut their living room carpet because HE decided that the living room needs a wood floor too. Can you even fathom the NERVE of the guy? She said he's been smoking in her car. It goes on and on.

Thank you Jesus. That's all I have to say.

Tonight I cast on a micro-premie jacket; I'm going to need that fearless button to knit it. Because I know.
Posted by Annie at 6:34 PM

That's my favorite part about my ex... the "X" part. Makes everything they do so easy to bear. And funnier, as well. ;-)

That sweater is truly awesome. Go forth and steek, you brave woman. I can't wait to see the result!

Steeks. Yikes, you truly are brave.

Love the bit about the X.

I have goose bumps on my arms....steeks and X's...both are scary thoughts!!