Cure for a bad button band? 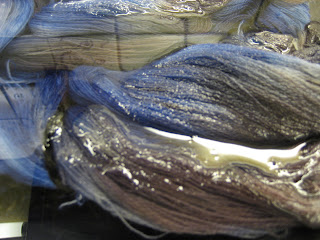 Cast on a shawl, of course.

I've got a soldier on my mind. He is the son of an old friend, and he was scheduled to leave for Afghanistan in November.

He plays the bagpipes (beautifully), and that talent made him a very good fit into cadets. He was part of the organization for many years; eventually aging out and soon joining the army. I know that he was so happy when he found cadets; he found himself, actually; he had really excellent experiences and great training.

I admire him and all soldiers, but I don't admire politics in the least.