Ukraine has talent, 2009 winner. A spectacular piece of art and theater; the story of a romance and family and war (at least that is what I see). 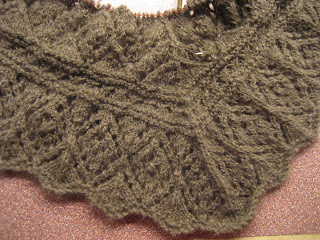 I am thrilled to announce that the Tinkmeister frogged my Miralda back a dozen rows or so to discover that I had knitted an extra stitch into the back of a dreaded nupp, thereby throwing half of the shawl off wack. I haven't picked it up again, but I will soon. I've got so many Orenburg shawls in my head that I'm a bit frozen.

This morning I finished knitting a knee warmer.. loads of ribbing, but I thought it would be great. Turns out I hate the damned thing, and I'm sure it'll hit the frog pond. Don't know if it was the yarn, the pattern, the leg it was supposed to fit, or the knitter; but it was a fail.

I've got two pairs of socks happening.. Both have one finished, both are roundy rounds. One pair is nearly finished; the problem being that I keep losing the project bag (that would be the one containing Signature Needle Arts DPNs).. and it is, in fact, lost again. The other is a pair that I'm knitting for myself from yarn that Mandie dyed. Love.them. I've been knitting them on the train, to and from work. 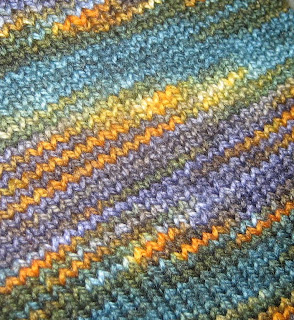 Just a quick note to say that if you're looking for a copy of Gossamer Webs, Shuttleworks still has some at a very reasonable price. When I realized that I absolutely had to have one but it was out of print, I sent Cal a quick email... victory! I knitted the little test shawl and learned so many new things within that tiny little project; it was amazing. 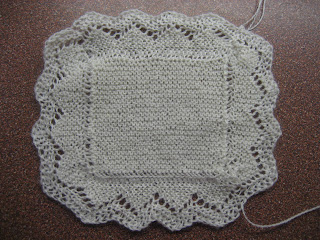 I've been spinning like crazy.. finished the Qiviut (but sadly there are some plying issues with it, and I'm quite sure I'm going to have to do some repair work before I knit with it). I bought some silk from Hedgehog Fibers, and I was really disappointed with the dyeing, so that's sitting in a bag waiting for a re-think (the exterior was spectacular.. utterly spectacular; but the inside wasn't dyed at all)... Also got some SW BFL from Pigeonroof Studios. I've never used SW BFL before, so I was looking forward to giving it a whirl. The fiber had loads of kemp in it, so it was slightly disappointing. The good news is that the vendor had temporarily switched distributors and didn't realize the fiber was of lesser quality, and she offered to refund my money. I like the customer service! Right now I'm spinning Sweet Georgia BFL (sorry Jacinda, my girl, I promise I'll mail you yours soon), and it's a nice as ever.

I was in a brief but fierce race to knit the Knitting Pure and Simple Summer Open Cardigan before Aunty Tink or Munchie finished theirs. Again with the victory. I still haven't wet finished it, but I will.

Loads of stuff on the needles, including a fuschia version of the Camelot coat, some Noro Retro fingerless gloves, and the Wollemeise Glows gloves (I have 4" Knitpicks dpns now, so the fingers are a little less excruciating).

I've been feeling really awful since the I had the hinie in the fall; finally went to the doctor and he's put me on some fierce antibiotics for the respiratory system, and Tamiflu as well. I'm so sick and tired of being sick and tired...
Posted by Annie at 10:28 AM 2 comments: 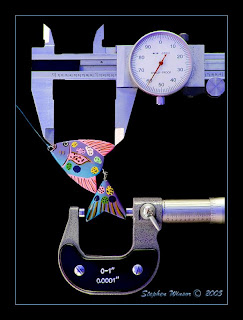 And it will be the last link for a while... you must be bored.

Here's my issue; people often come in to the store wanting to use a yarn of a completely different gauge. let's say it's thinner. Clearly they're going to need to knit a bigger size, and they'll need more yarn (due to the change in both stitch and row gauge). How do I do the calculation?

Turns out it's harder than I thought. I was hoping it would be something like: multiply by X-2 (X being something easy, like.. my shoe size). I think in general I'm just going to have to let the calculation be the responsibility of the customer; because I'm just not willing to make an error that would leave them without enough yarn, and nor do I have the time to do a complete and accurate calculation.

Better yet, I suggest that everyone knit Evelyn A. Clark patterns. Often she includes yardage for multiple weights.
Posted by Annie at 1:14 PM 1 comment:

If yarn was made of gerbils

A ravelry thread that is close to my heart.
Posted by Annie at 6:44 PM 1 comment:

Thought this might be useful... found it thanks to Adventuregurl's project page on Ravelry.

Cool! Now, does anybody have anything relating to yardage changes after a gauge change? That one blows my mind.
Posted by Annie at 4:26 PM 1 comment:

Click on 'Work' to enjoy what I consider true artistry. I especially love that Laurel often incorporates wood and fiber into her pieces.
Posted by Annie at 9:00 AM No comments: 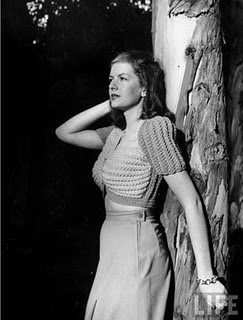 I was so so so so happy the other night when I came home because the mountain bike doesn't have a fender, and I was mud from here to there. I felt all.. well, hard core.

The feeling was completely null and void as I took the train to work the next day because I heard there was a skim of ice on the roads. I am telling myself that a measley 40 minutes of walking (all tolled) is better than driving.

In other news... I seem to have lost my signature arts dpns, which were last seen in a bag with 1.5 Hand Maiden, hand dyed, hand knitted socks. For charity, no less. I know they were in my bike pack, and after that, I have no idea. They'll show up, I'm quite sure.

The Miralda is in time out because I don't have the nerve to frog her yet. I might ask Aunty Tink to do that, because she's good that way. The last time I asked her to help me with lace she resorted to drink, and the shawl actually whupped her. The first one ever, if I remember correctly.

I don't know how I have the nerve (because I have about 10 things on needles that I can name off the top of my head), but I cast on a cute little sweater tonight that I plan to be wearing by next Wednesday. Me and Aunty Tink think we're going to get ours done before Munchie, purely due to the size of our girls compared to her girls. I didn't get much done tonight, but I believe I will be wearing that sweater on Wednesday...

This morning when I woke up the news lady said that it was plus 5 degrees outside. Now that, my friend, is biking weather. I got a used mountain bike off of craigslist, and it has big knobby tires and, well.. it weighs about 6 thousand pounds (OK, maybe not exactly that much). I figured it could keep it on the road on ice, snow and slush.

Mostly, I was correct.

The bike path was really excellent for a while, and I thought to myself that I could have easily ridden my road bike. In time though, the path was covered in packed snow, and I was busy congratulating myself on my excellent choice of vehicles.

That was before the slush.

Excuse me, but CRAP that's a tough slog... At some points I was trying to make it through up to 4" of slush and ice and frozen tracks. Next time I'm taking myself back to HOME ROAD and, traffic or not, it has to be better than what I rode through today. We'll see.

The good part? I saw geese, I smelled the river (most of it is still open) and trees and one person's breakfast joint. I breathed fresh air, and although I'm not in as good condition as I was 2 months ago (we'll call that PRE-HINIE), I got that 6 gazillion lb. bike up hill and dale, and I arrived at work without falling.

In other win-ish news, I spent a few nights over the weekend working on the Miralda triangular shawl. I'm mid-way through the diamond charts (which means I have knit 6 quadrillion nupps). The yarn is Bison, handspun on Donna's Rose and is absolutely perfect for the project. Gosh it's soft.. and beautiful. This is the year of Estonian/Orenburg lace, afterall, and it's about time I got serious about it.

Last week I finshed spinning the Qivuit and I have about a thousand yards (I estimate). My plan is to knit an Orenburg shawl (ie: no nupps), and I have what I think is the perfect pattern. We'll see...

I've been juggling Fleece Artist merino socks with fingerless gloves for Jim... there's all kinds of knitting going on these days.