Those Belgians are brilliant

To quote BGA when I made him chocolate chip waffles for breakfast.

Me? Blech. I never want sweet for breakfast. If those waffles had ham and cheese in them, I'd be all over them.

This has been a very unorganized Family Day weekend. I had some plans that have panned out, and some that have gone completely awry due to the fact that I didn't factor MY FAMILY into my plans. For example... I was going to spin at Make One on Saturday. I committed to being there. My family thought it would be a much better idea if they ate.. so instead BFML and I went grocery shopping and did errands. Sunday/My plans: Have Lorraine over to look at a wheel. Family's plans: Turns out BGA has a hockey game (which he played forward for the first time, and did very well). I did make it to Bess' Sunday Afternoon Guild meeting and learned about nalbinding (next I'll learn how to spell that). Today I was going to try to meet with Lorraine, but it's looking more like a trip to Head Smashed In Buffalo Jump or Drumheller. 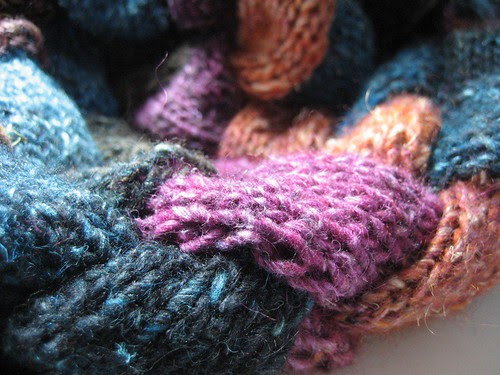 Between all of that, and Valentine's day, I've been knitting a Lady Eleanor Stole. My understanding is that it will suddenly become the world's most boring knit.. however, at this point I'm still really enjoying it and I'm closing in on 50% completion. I had almost completely lost my knitting mojo, and I have to call it restored at this point.

What yarn are you using for Lady E?

And yes, Vicky needs a tiara. She wants it now.

It's very strange here today. Normally we have every holiday off - even the Timmy's is closed, but we had to work today.

Ha! I actually know what nalbinding is, lol. Okay, I haven't done it but I researched about it when I was trying to figure out what sort of needlework might have been done about the time of the birth of Christ for our Bethlehem market drama.