I'll tell you some stuff... 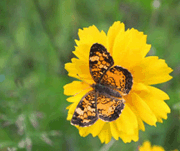 Then, you then tell me some stuff.

Tomorrow morning at 9am Mug is getting another award at school. I don't know what for, and neither does she, but I'm super excited and very, very proud of her. This time last year she got two, and last semester she was on the honour roll. Her hard work is acknowledged, and I am.. well.. the happy/proud thing (x1,000,000).

This time next month I'll be in Mexico. I'll be finding out what bunk I'm sleeping in, and sure as heck something will be making me nervous as hell... but it will be great once the tools flash up and I'm back in my comfort zone. I miss sawdust.. I really do.

My Lady Eleanor of the Targello is 70% complete. I really love it, and part of me would like to keep it, but I probably won't. I might save it for a back-up Stampede submission, but it isn't perfect so it wouldn't win anything.

I finally found the pattern/yarn that I'm going to use for Stampede this year. I ordered everything this weekend, but I'm not telling anything about it. If it works out, it's going to be great. If it doesn't.. I'm in a big, fat jam.

I have another big secret, and I am not going to tell it.. but I really want to.

I am so sick of winter I could scream. I feel like this every February.. spring feels so close, and then sure as heck it snows.

I have fallen on ice 3 times this year. Next winter I am getting rid of the Emu boots. They don't have tread. I don't think people in Oz need ice-tread; but we sure do.

Nini called tonight, but she didn't want to talk to me, she wanted to talk to Mug (aka: anz). So she did. I have a telephone message that she left me last week, and it's pretty darned cute. She's all about the zoo right now.

I'm very happy, and when all the yarn is put away at the shop, I will be happier still.

There is a super-adorable dog at the pound, and I would love to find a way to have him.. but it is totally impossible. Also, I don't want to become a dog collector (2 dogs, 2 cats, 6 people.. that's enough in this little house).

Spike thinks that if he goes outside to pee that somehow we will go to bed. He must be about peed out, because this is his 3rd or 4th try.

I drank most of a Framboise tonight. I didn't do as well at sharing as your average 5 year old (if 5 year olds shared beer, which they don't). I drank 1/2, then split the second 1/2 with BFML. Frankly, he is lucky he got that. ;) Gale, you are correct.. the peach is darned good. Most of you who know me also know that I don't really drink. Lately I have found 2 kinds of beer that I don't seem to react to, so it's been great!

Got the Debbie Bliss mag today.. and almost bought French Girl Knits, but decided to hold off because I have too many other projects on the go. I owe BFML one Valentine sock too.

I did all the laundry today, and also had a shower (sorry goils... HAD to go home and have one.. couldn't be seen in public - by people I know - with hair like that). I love the combo of freshly showered me and clean sheets.

I also hand washed 25 socks today. It wasn't that hard, and I really like how they looked all hung up. I would have washed 26, but I had one hand knit sock on (and one black sports sock). That's how I roll.

IK, I was wondering if the gunk in the lint trap of my washer is anything close to as gross as the stuff in the gunk trap of your dishwasher.

If you'd like to 'button' your eyes, a la Coraline, go here.

Eckhart Tolle rocks the free world. You should read his books, you really should.

Three times on friday someone talked to me about EMDR. I think that the universe is telling me that Gigi should come here. Ok.. it's possible that I manipulated the message somewhat and the universe thinks that I ought to try EMDR.

Have you heard about Tellington Touch? It makes me feel faint it's so wonderful. I wish I was a horse.

Someone recently found my blog by googling: crochet crap

My Gawd, I hope not. I wouldn't wish that on anyone.