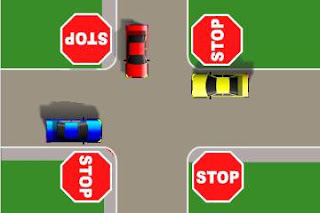 Why is it that people can't count to 4? Sometimes they can barely make it as far as the number 2 before they lose count.

5 (yes, 5. I'm sure) days a week I go through a 4 way stop on the way to school, and it just boggles the mind how many times there is a fiasco in the intersection.

(picture above represents #2 as having blown the line already. #'s 1, 3, & 4 are sitting there swearing - but hopefully under their breath, as there are imaginary kids in the cars).

Kick the Ginger day update: There isn't one. To date it would appear that the school hasn't had an assembly. No note has come home. I had a message that the teacher would call, but due to sickie-cell-phone-anemia I didn't actually hear from anybody. Mug tells me that they took her aside again, but instead of the teacher bullying her, they basically said that they thought she was being bullied by, and was covering for, the kicker. So the matter is dropped, tho the accused did get suspended.

When Mug was in grade 3 in the Catholic system a kid brought a knife to school, which he brandished while in line. The only way I knew this was because I happened to BE in he lineup with Mug. The Principal didn't think it was necessary to alert parents about the incident. I thought she was wrong. There were discussions.

I feel the same way now. I'm expecting a note saying.. geez.. sorry we were in the news the other day, here is our plan for the future.

I'm spinning some neutral coloured soy silk for she of the Tangled Arts. She has a plan for Tori, and I'm helping out. I'm really excited about it.

Flickr seemed OK there for a while, but now it's busted again. Geez. Think they'll give me a rebate? ;)
Posted by Annie at 6:36 AM