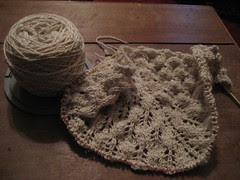 Seems like magic to me, anyway. I was reading blogs one day, and saw a similar picture to what I've posted, above. Someone had placed their cake of yarn (previously referred to as a hockey puck) on the spindle of a bulk cd holder - you'll have to click on the picture to actually see what I'm talking about. It works so well, & I'm just thrilled with it. When I wound this centre pull ball (it's the silk/wool that I was spinning a few days ago) it was so tight in the centre, that I couldn't get it to feed... so I decided to work from the outside of the ball, and to try the spindle. You should SO try this! You're gonna love it.

I've been working on a Fir-cone shawl that I found in that list of shawls I posted yesterday. It's going well. I need a lace success. I must have 5 Evelyn Clark shawl patterns on their way, so soon I'll be up to my ears in shawls (or.. I'll have Christmas 2008 handled).

I watched a number of George Strombouloupoulis podcasts; it's either that or stay up too late at night. Do you ever watch Strombo? You ought to give him a whirl; he's totally great.

Mug and I were at Make One this afternoon (by the way.. I don't hate circs at all.. I hate circs that are longer than I need.) I bought a shorter set for a piece of lace I'm knitting; it's a major improvement, and knitting is going well. Anyway.. back on topic... Heather was there with her sweet little puppy. Mug fell in love, and discovered that it would cost many, many hundreds of dollars to have such a puppy. She is totally heart broken. Spent the entire afternoon counting coins, and discovered she had a $600.00 shortfall. She offered to wash windows.

So.. poor thing cried herself to sleep. Reality is a tough lesson. It's hard to be a mom some days.
Posted by Annie at 9:34 PM