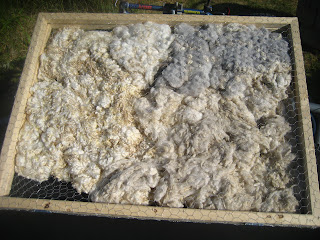 I could write for hours to catch up on the last few weeks... it's been crazy-fun, that's for sure.

But how about we just deal with today? With perhaps a touch of yesterday thrown in for good measure?

I built a contraption with 2x2's and chicken wire (my neighbor came over to ask if I was building a coop) to use for drying or skirting fleece. It's a clam shell configuration that allows airflow if there is damp fleece enclosed, or when opened up, provides a nice open surface for bits and unwanted pieces to fall through. it's a good thing, and I'm super happy with the result. Yesterday I washed Targhee, Shetland, Cormo and Border Leicester. I put it in the contraption and put it in the sun to dry (ha squirrels.. you are powerless against the contraption). It would have worked really well except for the fact that I left, and during my time away there was a fairly massive rain storm.

My goal over the next two weeks is to wash allllll of the raw fiber that I have on hand; with the exception of the new Cormo hogget. I think I'll just wash it handful by handful as I go.. The rest of it is getting scoured, and that's that.

Did I mention I got a new Cormo fleece? #840, to be exact. It is too beautiful to describe. You're surprized, right?

It's Calgary Stampede time just now, and in honour of that I came up with a new (to us) pizza tonight. Most Fridays, when all the kids are here, BFML makes up a big bowl of homemade dough, and everybody makes their own pizza to share. It was just the three of us tonight, but we decided to do pizza anyway. 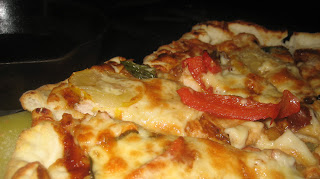 Prep: BBQ one chicken breast, let it rest for 5 minutes or so and then slice it up into largish bite sized pieces. Roast a red pepper on the BBQ while you're there, and put it into a paper bag to sweat. After it's cooled somewhat, remove and discard skin and seeds. Slice. Roast a head of garlic for about an hour at 400 degrees. Thinly slice a tomato (I used a yellow artisan); rinse seeds out, and pat dry.

Spread a thin layer of BBQ sauce on whatever pizza crust that you prefer. We normally have fresh dough, but I've been known to make pizza on pita bread... Layer the chicken slices, gobs of roasted garlic, tomato slices, a little sliced pepperoni, roasted red pepper, and fresh basil leaves. Put on as much grated mozza as you like, and sprinkle liberally with parmesan. Cook until the crust is quite done and crispy.


Besides washing fleece and making pizza, I've been knitting on the pink Lady Eleanor. It's at about 85% I would say. Tomorrow morning we're going to the Stampede grounds to watch fleece judging. I'm going to try to shadow.. we'll see if it's possible or not.

Please Lord, do not let me find a fleece that I like.
Posted by Annie at 10:26 PM

Those are both great ideas Annie.

And I love your chicken wire contraption there. It's so great when you make yourself a tool and it does just what you want it to do. Great job!

Have you ever met a fleece you didn't like? ;-)

Your fleece drying rack is amazing. And I'm sure that a good dousing by rain could only improve the finished product. Sort of like washing your hair in rainwater.

Wow that fleece looks wonderful and the pizza picture is making me hungry.