I wrote this post a week ago yesterday, and didn't publish it... So, here's some old news.


Opera, Mug, BFML and I were up and out of our houses at the crack of dawn, in order to get into the Stampede grounds by 9am.. cuz it was family day, and it's free if you get there fast enough. We made it with 3 minutes to spare, and saved ourselves a big bunch of money.

The plan was to attend a sheep related event at 10am, however the shearing schedule was re-arranged, so the first event wasn't until noon. We landed up watching a sheep dog and a blacksmithing competition, and they were both fascinating. The dogs are purely amazing and clearly smarter than the two we have here at the house (don't mention that to them though, we don't want any embarrassed pups). Twice during the sheep dog competition the ewes turned on the dogs, pawed the ground, and refused to budge. In both cases the ewes were victorious. I was quite shocked!

We eventually got to see shearing, but not until 3pm.. gosh it was a long day. BFML put up with the whole entire thing until that point, and made a break for freedom. Opera and I watched it all, and learned that you don't have to be fast to be a winning shearer; you have to be GOOD. The more second cuts, and missed spots, the more points against you.

Just before we went home, we turned back and spoke with the head of the Sheep Breeder's Association and left her with our names and numbers. It would lead to a pretty exciting Stampede for me and for Opera.

Just in case you're bored, here's some super cute puppies. 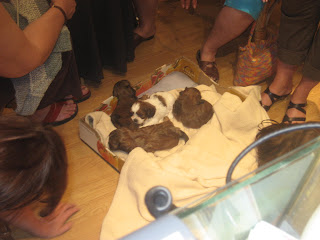 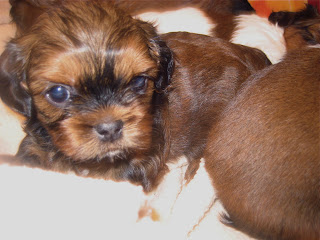 super cute? please, those are beyond cute, they don't even register on a meter.