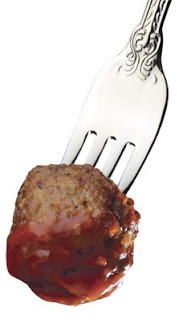 I should really think this post over.. to get it exactly right. I think that I only have one chance, and I'd hate to blow it.

So.. tonight was the guild meeting. Marilynn, Correna, Gordana, Rose and I had volunteered to do snacks. As you may know, I'm just wild about snacks at guild. I've been thinking this over for months, and I really wanted to do a great job. Correna and I talked on the phone; Marilynn and I passed notes back and forth on Ravelry, and it went a bit like this: Marilynn was going to bake all day long for her contribution. We're talking the most lovely lemon loaf, perfection in carrot cake. Correna had planned to prepare squares of dark bread with cream cheese and smoked salmon. Unfortunately Gordana had to reschedule because of a family get-together in BC.. but we felt as though we'd do a great job even tho one of our members had fallen by the wayside. Me? I decided I'd provide cream puffs and meatballs, which I'd prepare at work, sometime in the afternoon.

Then came THE CALL. Correna's Juno was giving birth to puppies as we spoke. She wouldn't be able to come after all. It was a blow.. but we had Rose in reserve as our secret weapon, and things still looked good. Marilynn said she'd see what else she could come up with as far as appetizers go. Little did we know that Laura would arrive at guild with 2 extra cakes. It's possible that we have pulled together the Snack Night of All Time. The table was resplendent.

After the meeting was over, people began to line up at the food table! I was thinking that things were going well..... suddenly the room was filled with the smell of meatballs in sauce. I heard that our group should be hired to do snacks every meeting, and then I found myself standing up and acknowledging that I was the meatball person. Someone asked me if I'd consider putting my recipe in the newsletter? Another came to ask if I could please let her know how to make the meatballs so that she could prepare them for her son's family.

I was riding the wave, baby. Snack perfection. Newsletter worthy.

Following you will find my secret meatball recipe:

Open a bag of frozen meatballs that you have purchased at Costco. Use scissors. Pour said meatballs into a crockpot.
After consulting with Kim, pour on most of a bottle of BBQ sauce and some water.
Press 'Start'.

PS: Marilynn says that next time she's racing me to Costco. And Juno? I don't know how she's doing, but when I talked to Correna, there were 2 puppies. I'll say a little prayer for her and hope that all is well.
Posted by Annie at 10:59 PM

LOL, Yup, you had me going!

You are my new Kitchen Saint - St. Ann of Meatballs. I am cooking impaired, so I could really use the help. ;-)

I devoured some of the leftovers after returning from a U14 soccer match (another win, BTW) and those meatballs were indeed, delicious! I also applaud your snack prowess, ml. YUM!

I've had that recipe before. Always good. Try it with a plum sauce and pineapple too.

I can't believe I had to miss the best snack night in the history of the Gilli Hook meetings! I had to work. And to think the person I was interpreting for spent the entire night on his blackberry or fast asleep. Ugh!
Next month I'm there!
Miss you.

awwww, and i missed it! poo.