Fund raising and knitting, and hockey tournaments and kneecaps

Maybe not in that order, and sometimes done together. For example, knitting and hockey tournaments.

Aidan is in one. A tournament I mean. It's his fist time, and it's all very exciting! This week is Esso Minor Hockey Week, and he's participating in the what has been described as the largest hockey tournament in the world (a Guinness Book record book title holder, I hear). He needs to win 3 games in a row to be in the finals, and last night his team won their first game. Dida, Ike, Mug, Nini and I were there as his fans, and BFML was Assistant Coach (he has earned certification and yesterday was presented with his pin).

Anyway, we all cheered lots, and had a great time waving and jumping, and I managed to finish knitting these (ahem.. he's not on the ice allllll of the time, now is he?). 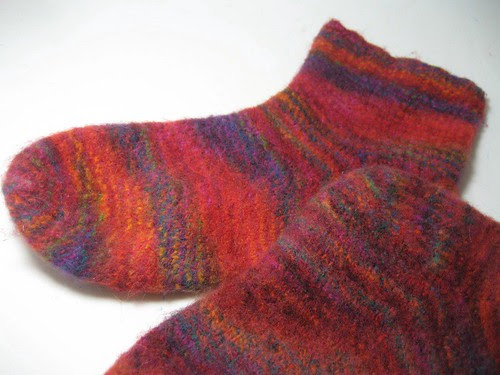 When I came home from hockey I threw them in the washer and felted them.. and they are now in my top 2 warmest socks category. I totally love them, and I'm so pleased with the results. There was about 3 yards of yarn left from a 100 gram skein, so I consider a nice warm pair of felted worsted socks, started and completed in less than 48 hours, to be a pretty darned good investment. The yarn is Mountain Colors "Mountain Goat" - colourway: Firehole (I think the name is a bit unfortunate!). The socks don't exactly match.. they're siblings for sure, but not identical twins. I linked to M1's site, but don't expect to find this yarn listed.. it moves so quickly that you'll only be able to get it in person or over the telephone. 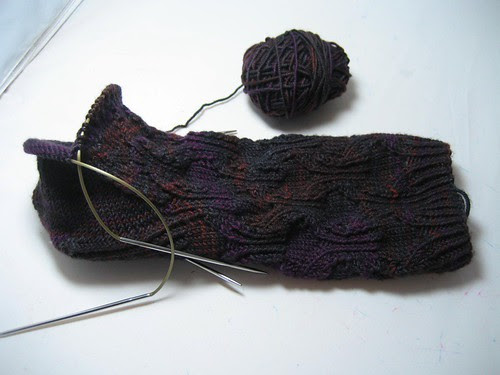 I had been a tiny bit disappointed that due to other Saturday obligations I hadn't been able to drive to Banff to pick up some more Qivuit fiber. I'd spun everything I had onhand, and still don't have enough to knit the wrap I'm planning to compete with at the Calgary Stampede. Last night after hockey I started to clean up my worst "stuff collecting" corner... to be honest I was looking for the 'Mona' Cookie A sock pattern, and I found THIS: 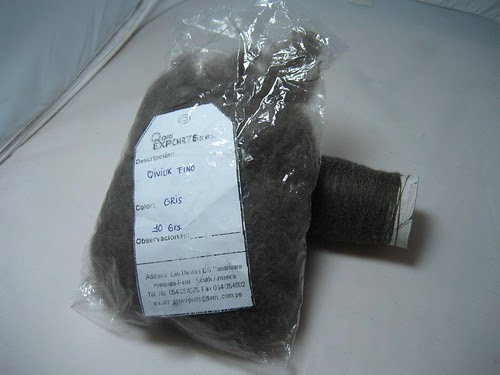 An update: Things are going very well at the Knitting Room. I have been in overdrive trying to figure out all the available products and who to get them from, and also trying to integrate and organize stock. I've met loads of wonderful people, and lots of my friends from M1 have popped by to give me hug and make sure I'm doing OK. Now, that is such a blessing.. I have to say. 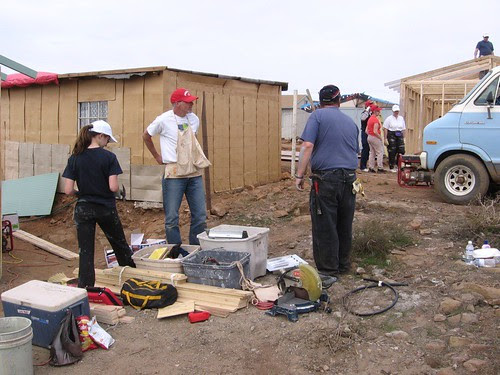 (The cardboard house that our family had been living in. They had built it with garbage they were able to find. This was a very, very fine house compared to some up there on that mountain.. yet a terrible fire hazard, cold, and every time it rained... wrecked)

I don't have words to express how grateful and thankful I am for all of your help and support in this mission. There is absolutely no question that I will make it to 100% of what I require to pay for the trip, between donations and the yarn/fiber I've been selling. I have asked for some feedback on the family from our last mission (the house that I helped build, in particular), and when it is provided, I will share it with you, so that you might have an idea how a real home has affected the lives of even one little family. The little girl in the family was not being accepted by the village children, because she was born in another village and had to move when their circumstances became dire. BFML and I bought her a swing-set; and because there is absolutely no playground equipment in the village, we were hoping that her toy would create opportunities for her to make friends. I so hope that it worked out. Her name is 'Bellie', and she will almost be 8 now. 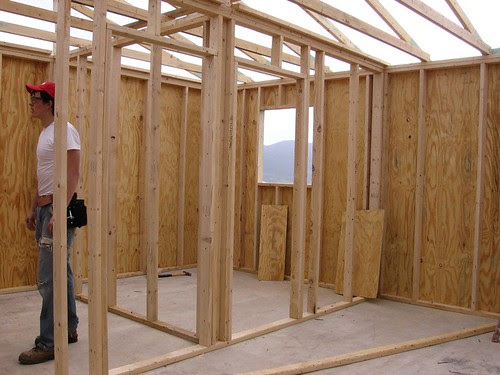 (The cement pad is poured before we arrive. Here you see the house after we've completed framing and have put the exterior siding on. Drywall to follow. What you see is 3 of the 4 teeny tiny rooms in the house. There is a 'kitchen' area, living room, and 2 very small bedrooms. The entire house would probably fit into your living room)

I wish I could take more things with me to the village.. I'd like to bring things for the kids - they have so little, but we are so restricted for space that whatever I take has to be carried on my lap from San Diego to our final destination. It's harder than you might imagine, when you consider that the 9 other people in our van are doing the same exact thing - elbow to elbow, and we have to also deal with sleeping bags and the driver's 'luggage'. 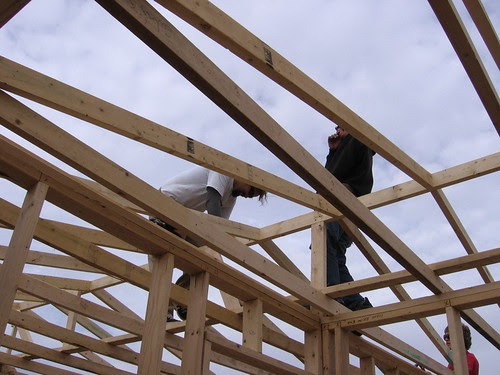 (I cut every single board for the house. Inside and out. It is one of my proudest accomplishments. I was told at the last meeting that I would be the cutter on the next house too.)

One of the things that made the most impact on my during our last mission was when one of the girls in our group went into town and bought groceries for the kids. She was a very strict vegan, and yet she had her hands in cold meats and deli foods up to her elbows in order to get good protein into the children. A lot of those kids survive on candy.. it's affordable and available in the village, where staples might be out of reach financially. Anyway, when the doors of the van opened, and there was Jasmine handing out buns with cold meat and potato salad.. well, the little kids went crazy trying to get some. We saw many of them join the lineup again and again so that they could eat more. I'm talking about kids from around 2 years old.. clammering for a sandwich. Eating every scrap of potato salad and then licking the paper plate clean.

I can't remember the last time that my kids ate potato salad without wincing. They've never once considered it to be a delicacy outside of their grasp.

I'll be posting another round of fiber tonight; this time dyed mohair locks and silk hankies (beautiful, if I might say so!). Either would be great for spinning or needle felting.

Finally... If you know Sittie, she's had an accident that broke her kneecap. Last Saturday she had surgery.. she has been wheelchair bound and completely immobile since then. Her condition is pretty good, and she told me that she was able to go many hours without pain medication yesterday. I hope that you can take a moment to say a prayer for our island grandmother; she could really use it right now.
Posted by Annie at 9:46 AM

Good luck on your fundraising! And good luck at The Knitting Room. I'm glad you have started to work there, its my favorite shop in Calgary, and not just because its the closest to where I live. I love the wall o sock yarn, and the solid opal colours etc. I like the Custom Mills stock, and will pick up some more once I'm off the yarn diet. Also the nice selection of ultra alapaca from Berroco. I guess I'm telling you this so that you keep my favorite stuff, and add more good stuff! Thanks, Anne