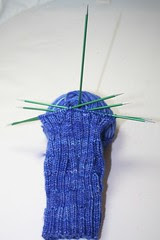 I have been trying to blog about something other than fund raising (but get ready for another wave.. those silk hankies are in the photography stage!).

So... I started a post about beer. Pretty good, huh? I bought a 4 pack of historic beers from Scotland, and we tried a Kelpie the other night.

Just as I was about to start writing (had a picture and everything) the dog exploded *fyi, the incredible exploding dog had gotten into cat food, which upsets her stomach. she is fine now*. You don't want details. All thoughts of beer were banished from my head and I became one of the saddest human beings on this planet *due to the impending cleanup job*.

That very night I went to Make1, and my friend Aunty Tink gave me my Signature Needle Arts 2.25mm dpns (green) and 4.5mm - 14" red straights with a teardrop top. We'd ordered them and had them shipped to AT's daughter's house, and she mailed them here. (it was a high shipping fee dodge) Ya... even exploding dogs and beers that taste like kelp slip in the distant past in the glow that is SNA needles.

Now, my friend Gale, who I bow too in all things knitting, simply despises her SNA needles. I was shocked to hear it, and was in dread about mine arriving.. what if I hated them too? (Let it be known that I still bow to her, and I think that somehow her needles are messed up something fierce)

Man.. they are so, perfectly, me. I love them (tho I haven't actually knit with the straights).... those dpns are perfection. What to try on them?... a very special ball of Hand Maiden Casbah that I had been hording for some time... and a newly downloaded copy of Francie socks. I've been wanting to knit them for an age.

So here were are.. in the moment.

Last night I woke up at 3, and sat downstairs listening to the Food Channel and knitting my Francies, with the Casbah and the SNA's. I felt as though i was on the planet all by myself. Tonight I laid on my bed and put a portable dvd player on my lap.. watched DVD2 of the Tudor's first season and knit for 2.5 hours.

And it was so good..

That's simply all I have to say for myself today.

Dear Annie! Is the dog OK?

So glad you like the needles. They certainly are not for me.

I love Kelpie beer! I'll be right over to help you clean up the exploded dog and drink your beer for you.

Looks like it was a great day to be the Annie!! Are the signature needles worth it? I don't know how I'll decide what size to order.

And what a lovely thing for you to say! (The sitting & knitting happily business, not the exploding dog thing.)

I'm a little envious - again, of the knitting, not the exploding dog.