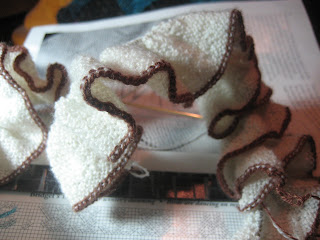 The next night, in Mexico, I crashed at about 8ish. Each night was a similar story; tho I wasn't working too hard physically I was totally exhausted. I slept through the night over and over again. It was so great.

I just don't know. I expect it's a combination of everything.. all I know is that it was very, very wonderful, and I have to figure out a way to make it work at home.

Regarding dental hygiene... I had my teeth cleaned and polished, and had a checkup while I was in Mexico; all for the princely sum of $25.00 US. Can you believe that one? I.am.so.happy.

Prior to leaving for Mexico, I had been finishing off the upside down Haiku on the Near Solstice shawl... beautiful! Save for one misplaced yarn-over on a letter E. Just enough to blur the letter, and make the entire word illegible. These last two nights I've been sitting on the couch struggling with it. I have no desire to frog 20'ish rows of approximately 600 stitches each and start the haiku afresh. Nor can I leave it as is... So I initially tried to tink the E, and re-knit. Fail.

I'm telling you, it took some serious deep breathing before I had the nerve to start tinking that mess.... I had no idea if the correction was possible, or if I was causing myself a massive trip to the frog pond. Anyway....

Next I tinked approximately 1/2 of the word 'secret' and re-knit that. More-fail.

Tension was a problem, so I thought that a set of smaller metal DPN's would help, and I tinked for a 3rd time... this time, the entire word. I spent all of tonight re-knitting a section of 51 stitches, and for the most part, the problem seems cured. At the last possible moment, I neglected to turn the work, so I have to tink 4 stinking rows AGAIN. I'm not complaining, but damn.. it was a huge amount of time and energy to resolve a single yarn over.

I'm glad you were getting some much needed sleep.

Glad you're back, glad you got sleep, and my word, you are brave to tackle so mch tinking....

Do we get to see the before and after? Or at least the after? Of course I have only the vaguest idea what you are talking about. :)