The Year of Estonian/Orenburg lace is turning into...

In happy news, there is SOME progress on the lace front. I was able to find a copy of Galina's book from Shuttleworks, and so around the time of the Olympics I spent many, many hours working on the Eastern Star shawl. I think i have 5" or so completed (scoff if you may, that's one crapload of knitting we're talking about there); and tragically I dropped a stitch that ran allllll the way back to where the lace joins the shawl. On that note, the whole project went into the time out basket, and it resides there still.

OK, so I bought an Orenburg shawl from Galina. I admit it. It's fabulous and I love it, and I just saved myself a year of knitting. (It's everything I dreamed it would be and more)

My Estonian shawl (the Miralda) is almost complete, but I ran out of handspun just inches before the cast off. Not a huge problem (thank God), Correna had 4oz. of Bison that she bought from the same vendor as I had, so I have been spinning that to finish the shawl with. I thought I'd DO THE RIGHT THING (cuz I love her) and spin the whole 4oz and return her down in the form of yarn. So.. I need some extra time with that. 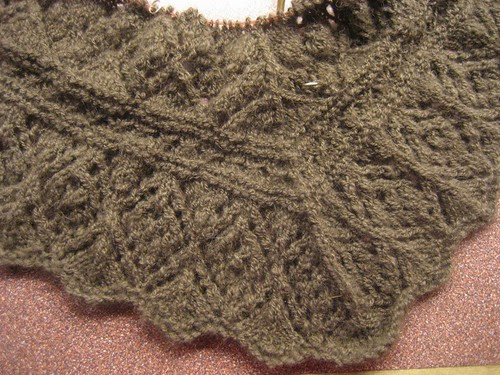 As far as lace goes, I did knit Amy's new bolero pattern 'Watershed', and it's quite lovely. I chose the wrong yarn for the project, and the garment doesn't drape the way it ought to. My fault entirely. 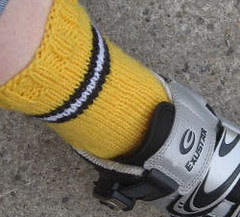 Ohhhhh, and socks. I've been contract knitting them left, right and centre. Also, Martha donated a whole basket full that she'd knitted, so a bunch of the money I raised for the Ride to Conquer Cancer happened on account of socks. Currently I'm knitting a pair of yellow ones that I can wear during the ride. At least I hope so, they're DK weight, and maybe a little thick for the job. We'll see. I also have a pair of Casbah socks in blue on the needles, and finished a pair of Silk Garden 211 socks for Donna's birthday.

What else? Hmmmmm... I knitted a Wool Leaves for a shop display. It's kinda cool, and will make a nice lap blanket when I bring it home. 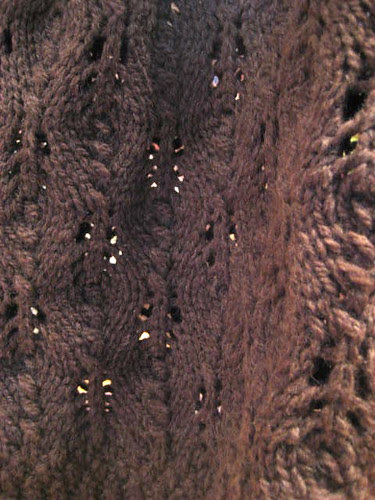 Oh! Over a weekend retreat I knitted a version of Kourtney's "Mistaken" shawl. I absolutely adore it! You can knit it for yourself by downloading her free Ravelry pattern. (I actually knit the green one shown, but the picture is Kourtney's) 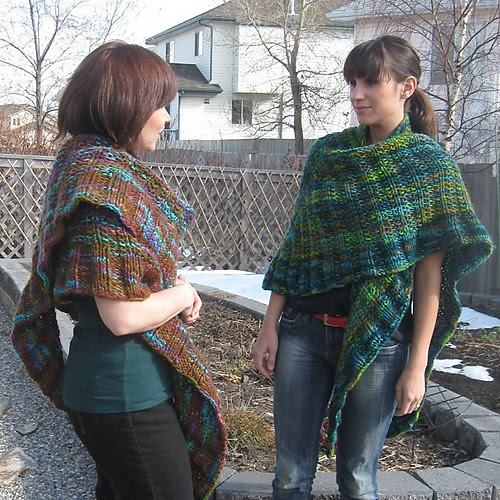 Lots of other stuff happening at the moment. My mom is having surgery on June 1 for breast cancer, so I'm going to fly to Victoria for 2 days. Nini turns 3 on June 4th. I have the MS Ride on June 12/13, the Ride for Dad on June 19th and the Ride to Conquer Cancer on June 26/27. It isn't even June yet, and somehow it seems like the summer is half over. To my utter shock, I barely have any more time to train for the rides. Damned blizzards.

The puppy turned one! He's so amazing, and cute, and funny, and sweet, and talented, and did I say funny? 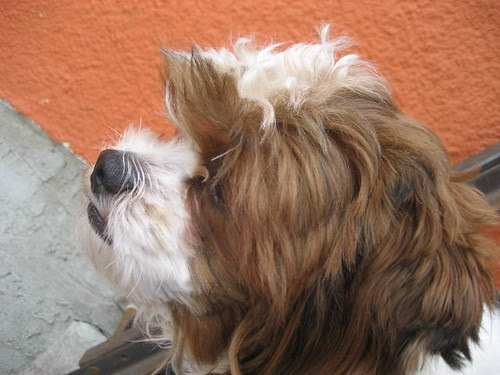 Speaking of SHOCK, it would appear that I'm not going to have anything suitable completed to put into Stampede. I love a rosette, I have to say.

This has not been the year of taking good photographs, so I'll post this as is, and hope that I can fill it in with images at a later time instead of just.not.blogging.cuz.i.have.no.pictures.
Posted by Annie at 12:00 PM

it was loverly to see you on Friday! next time I'll leave the man and spend some quality time. xo